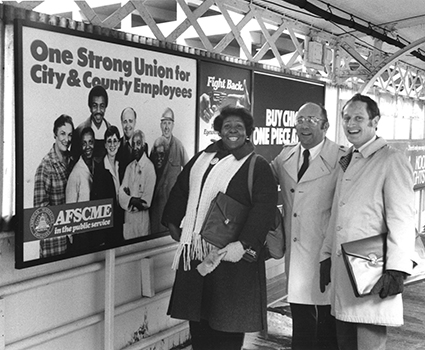 In the 1930s, during the depths of the Depression, a small group of government workers in Wisconsin banded together to protect their jobs and the public services they provided. AFSCME grew out of this association. In 1936, AFSCME received a charter from the American Federation of Labor.

AFSCME had 240,000 members in 1964. Over the next two decades AFSCME grew to a membership of one million and established a national reputation as a progressive and democratic union, fighting for the interests of all working people.

AFSCME is the largest union in the AFL-CIO with 1.3 million members.

In Illinois, the first local union was formed in 1942, with just 20 members. During the '50s and '60s, dozens of groups of city, county and school district employees formed AFSCME local unions and negotiated contracts. But AFSCME members had no legal guarantee of their right to collective bargaining. Management could always refuse to negotiate with the union.

But in 1973 AFSCME won a major breakthrough when Gov. Daniel Walker agreed to grant union rights to state employees. With a base of local unions already functioning in most state corrections and mental health facilities, AFSCME launched a massive organizing drive among state workers in 1974 and 1975. This resulted in the organization of 40,000 employees and the formation of AFSCME Illinois Council 31.

After years of intense legislative work, in 1983 AFSCME won passage of laws granting union rights to virtually every public employee in Illinois. Winning these rights touched off another tremendous wave of organizing across the state, which increased the number of AFSCME-represented public workers in Illinois from 40,000 to 60,000.

In Chicago and throughout Illinois, AFSCME members provide the essential public services that their communities rely on. They’re on the front lines of public health departments fighting the COVID pandemic. They protect kids from abuse and neglect. They care for elderly veterans, provide supports for people with disabilities and make sure people get the help they need, from food stamps to medical cards and unemployment insurance. AFSCME members also work in our libraries, parks, courts, jails and prisons; they respond to emergencies, and in many communities plow roads, repair streets, collect trash and trim trees.

By standing together in a strong union, these public service workers keep up the fight for fair wages, affordable health care, safety on the job and dignity in retirement. AFSCME members use their seat at the table to speak out for the resources their communities need, to lift up all Illinois working families, and to improve the public services they’re proud to provide.