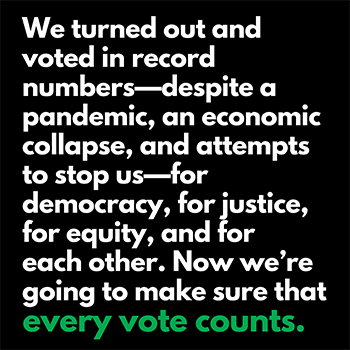 Americans have voted in huge numbers to move forward to tackle our nation’s greatest challenges and make life better for all of us. AFSCME members made their voices heard!

The following candidates were endorsed by AFSCME Illinois PEOPLE*, some results are still pending.

Federal and state legislative incumbents are noted by inclusion of their AFSCME PEOPLE voting record. AFSCME does not typically endorse in uncontested races.

Amendment did not pass. Millions of Illinoisans supported tax fairness and funding fairness by voting Yes for the Fair Tax amendment that would cut taxes for the 97% of Illinoisans who make less than $250,000 a year, require the wealthiest top 3% to pay their fair share, and raise billions of dollars to invest in schools, health care and jobs in every part of the state. The opponents of tax fairness, the millionaires and billionaires who are desperate to protect their own special deal, poured millions of dollars into false attacks designed to frighten and confuse voters. Although the outcome is not what we wished, moving Illinois toward tax fairness while funding important priorities in every community is the work our coalition has been doing for years, and we will continue.