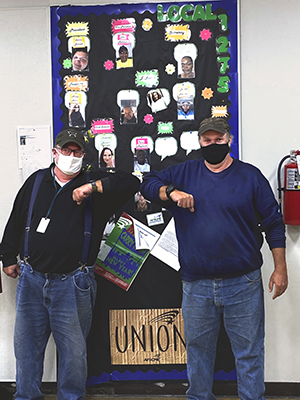 It was a back-to-school time unlike any other this year as AFSCME members in education settings prepared the way for the students and families they serve. From early childhood to higher education, AFSCME Council 31 members are navigating a radically changed school community while advocating for the resources and protections needed for a safe workplace and learning environment.

In Rockford, 30-year veteran paraprofessional and Local 698 President Betty Christiansen works in early childhood education programs, screening children and assisting in the classroom. The special education students she and her co-workers work with are especially vulnerable. Many cannot tolerate wearing masks but require close, hands-on care.

Members of Christiansen’s local were anxious about the return to in-person classes, an anxiety compounded by the administration’s lack of communication.

“The plan has changed so many times,” Christiansen said. “There was very little information shared, and when they did communicate, they often left paraprofessionals out of the loop and in the dark. Our union has brought members’ concerns to the administration and pushed them for a plan.”

The union has also played an important role in educating members on newly expanded family leave rights. Although most paraprofessionals are women, often moms of children with special needs themselves, many were previously ineligible for Family and Medical Leave Act protection because they did not work enough hours.

The most impactful recent victory, however, was the expansion of unemployment benefits to cover school district employees.

“Our members made a lot of phone calls to help get the legislation passed,” Christiansen said. “I’m so thankful we have a union that thought of us; I don’t know what we would have done otherwise. Many of our members live paycheck to paycheck and are single moms.”

Christiansen noted that no members have been laid off, and with the help of the union, those impacted by program closures were reassigned to comparable jobs in locations of the employee’s choice.

Drivers in Local 1275 were excited to come back to school, reconnect with students and families on their routes and be a part of supporting the community during this difficult time. But drivers were also concerned about a lack of personal protective equipment: RPS only issued two masks per driver, and drivers were given additional cleaning duties using new and potentially hazardous chemical cleaning agents, issues the local is continuing to address through labor-management meetings.

In Champaign-Urbana, AFSCME Local 3700 members at the University of Illinois Child Development Lab and Early Childhood Development Lab returned to in-person classes with much apprehension. Consistency is key when working with young children, member Lisa Pannbacker observed, but the children in the program had been out of the classroom since mid-March and would now be returning with a new set of rules to enforce social distancing. Fortunately, some measures to prevent the spread of the virus were second nature to staff in preschool settings, such as washing hands frequently and sanitizing surfaces and play materials.

Unlike many other high-risk settings, the university provides for regular testing on paid time. Employees can either get tested during their regular work hours with no loss of pay or receive pay for time spent testing while off-uty. And when an exposure occurs, employees receive paid time off for the quarantine period, Pannbacker said.

At the Illinois School for the Deaf and Illinois School for the Visually Impaired in Jacksonville, back-to-school brought a different set of challenges. AFSCME members at the schools work both in the classroom and in residential settings. With classes going virtual, members feared for their job security, but also felt strongly that with support, they could adapt their work to the new circumstances.

“Fear and emotions are running high,” said Local 38 President Shelly Hoots. “At first, management wanted to assign us to janitorial work while the school was closed for in-person classes, but we would not allow any erosion of the contract. We also felt we would benefit students more by continuing to do the things we do when we’re in the dorm with them.”

Prior to the last labor-management meeting, the local used a video conferencing platform to bring members together to develop a proposal for using their skills to help students continue to develop their independence while learning off-site.

When students are on-site, residential staff help them with a wide range of tasks, from preparing snacks to sewing buttons and making beds to dressing themselves. The local proposed a plan for engaging residential staff to help the schools develop training modules that students and their families could use at home, allowing them to continue to develop these important life skills. One idea was to produce a series of videos with corresponding slide presentations that students and their families could do at home, like a how to make a grilled cheese sandwich step by step.

“My members are the reason I keep pushing,” Hoots said. “I want everybody to know we’re going to get through this. We know AFSCME has our back.”