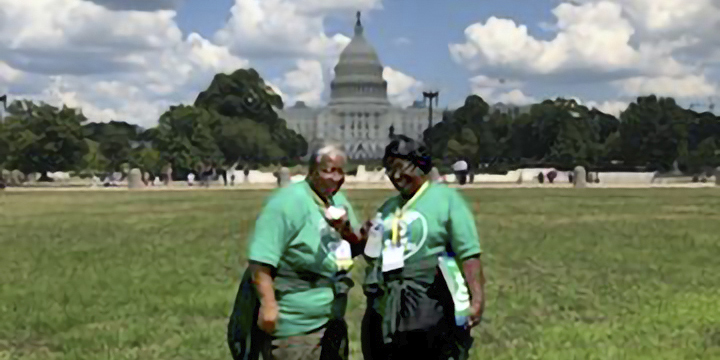 AFSCME retirees from across the country met on Capitol Hill in Washington, D.C. this July for their annual meeting. Chapter 31 Vice President Mary Jones and Treasurer Alma Wingard represented Illinois retirees at the summit.

“There are nearly a quarter of a million public sector retirees in AFSCME and together we are a massive political force,” said Wingard.

“We must stay engaged and mobilized, not only to protect retirement security but to ensure that the labor movement, which plays such a vital role in fighting for a fair economy, can continue to grow.”

The meeting included lobbying on Capitol Hill focused on the following issues:

Social Security, Medicare and Medicaid: Retirees urge the protection and expansion of these programs and oppose any efforts to privatize or create individual retirement accounts. They are pushing for a cost-of-living adjustment that lifts everyone up.

Affordable Health Care: Retirees are pressing to lower the price of prescription drugs, provide consumer protections from surprise medical bills and unexpected charges from out-of-network providers for emergency care.  They also want to repeal the 40% tax on high-cost worker and retiree health benefits.

Labor Rights: Retirees seek the same protections for public service employees as those afforded to workers in the private sector. The Public Service Freedom to Negotiate Act (H.R. 3463 and S. 1970) as well as the Protecting the Right to Organize (PRO) Act (H.R. 2474 and S. 1306) are two pieces of legislation that protect collective bargaining rights and make it easier to form unions.