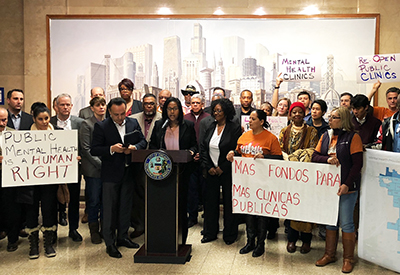 The Chicago City Council overwhelmingly passed a resolution January 23 creating a task force to study the state of mental health services available in the city. The task force will make recommendations to improve the city’s mental health safety net.

Working together with community advocates, AFSCME has been a long-time proponent of protecting the city’s public mental health services, attempting to prevent the closure of six CDPH mental health clinics in 2012, defend against privatization and call for the expansion of these critical public services.  CDPH employees, members of AFSCME Local 505, played a key role in this fight.

On Jan.16 Alderman Sophia King (4th Ward) presented legislation at the City Council Health Committee entitled the “Public Mental Health Clinic Service Expansion Resolution.” The resolution calls for the creation of a task force to oversee a public input process and independent study with the goal of identifying the types of services needed and geographic areas most in need. The Task Force will also identify steps that should be taken to strengthen existing CDPH clinics and potentially re-open closed clinics.

The resolution passed out of the Health Committee unanimously with 48 aldermanic co-sponsors and was passed in the council on January 23 with a vote of 48-0.

The city still operates five clinics in medically underserved areas. These remaining facilities provide a vital—but too small—safety net for those who have few alternatives by offering individual therapy, group therapy, case management and psychiatric evaluation and treatment.

A WBEZ report in 2015 found that in one year, Chicago’s 911 service took 22,000 calls that had a mental health component—with the most mental health calls coming in areas that have the fewest mental health services. The report also found that more than a third of the private mental health providers on the city’s referral list had no outpatient psychiatrists or had closed their waiting lists.