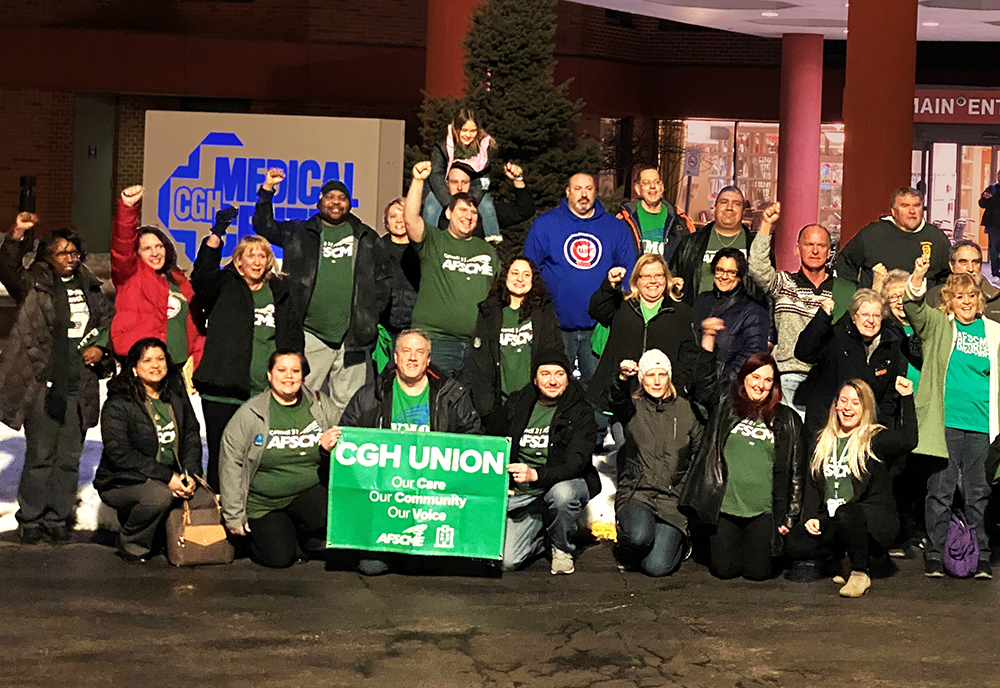 Federal law gives American workers in the private sector the right to join together with co-workers to form a union and bargain collectively with their employer. State law in Illinois does the same for public employees.

Sounds clear and simple, but in reality, forming a union in a non-union workplace can be extremely difficult. Too often, workers face intimidation, harassment and retaliation.

“Many workers start a new job and a union is waiting for them. Their rights and benefits are well-established in a longstanding union contract,” AFSCME Council 31 Organizing Director Abbey Davis said. That’s the experience of most Illinois AFSCME members who work for state or local government.

Even so, “there are still hundreds of thousands of workers in our state who don’t have union representation,” Davis said. “For many of them, having a voice on the job is a much higher hill to climb.”

That’s because employers don’t want to give up power, and laws to protect workers aren’t strong enough.

Employers don’t want to give up power

In a non-union workplace, the employer has all the power and control over working conditions and compensation. All too often, they’ll fight to retain it at any cost.

“Employers often say they don’t want a union because they don’t have the money—recognizing that unions seek to raise wages,” Davis said. “But they spend more money fighting the union with lawyers and consultants than they would need to spend on wage increases.”

It’s especially shocking to discover how many nonprofit agencies or even governmental bodies will devote scarce resources to battling employees who seek a voice on the job.

At a nonprofit disability agency where employees recently formed a union with AFSCME, the employer paid four out-of-state “union avoidance” consultants $3,000 a day plus travel and lodging expenses.

At another agency where workers wanted to form a union with AFSCME and the labor board ruled that separate elections would need to be held at each of its three facilities, the employer closed down the facility where union support was strongest. After those workers lost their jobs, employees at the other facilities were too frightened to move forward.

“It happens all too often,” Davis said. “Although having a union can help improve services, stabilize the workforce and even find cost-saving efficiencies, employers want total control.

“We make sure employees know what to expect and prepare them for the fact that management will try to intimidate and mislead them, even threaten their jobs,” Davis said.

The Taft-Hartley Act led to a cottage industry of anti-union consultants—often lawyers—who advise employers on how to get away with stomping out a union organizing effort.

Anti-union tactics include holding mandatory “captive audience” meetings on work time, intimidating employees and inundating them with propaganda. Anti-union consultants will harass employees at home or at their second job, urging them to vote against the union. They will threaten pro-union employees with demotions, lower pay, cuts in hours or even termination.

UCAN—a well-known, publicly funded nonprofit in Chicago that helps at-risk youth—paid a high-priced “union avoidance” firm to fight employees as they formed their union with AFSCME. Workers who voted to join the union more than two years ago finally won their first contract (see page 13) early this year.

More than 800 employees at CGH Medical Center in Sterling who recently voted to join AFSCME are awaiting labor board certification. But the city-owned hospital hired a $500-an-hour anti-union lawyer to do everything possible to delay.

“We need more labor board officers, tighter timelines with faster certification and better standards of union recognition, plus punitive consequences that put the burden on the employer, not the worker,” Davis said. “Right now, labor board regulations allow the employer to drag out the process, which can deflate employee morale.” 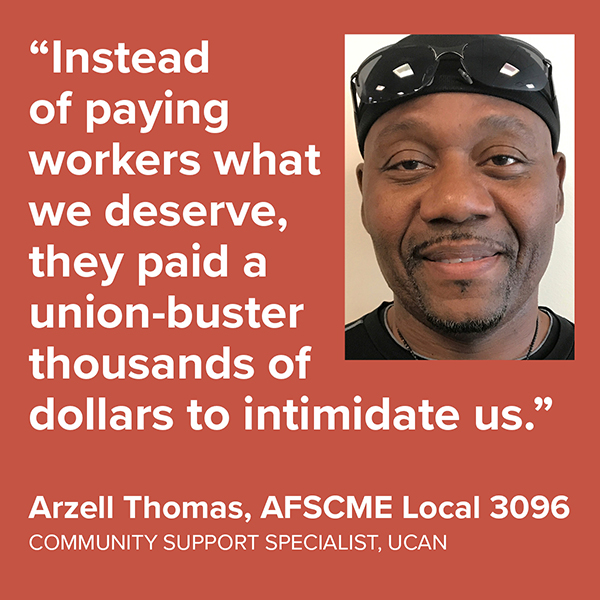 President Barack Obama strengthened worker protections at the National Labor Relations Board, improving the union recognition process, expanding protections for workers’ rights and allowing unions more access to workplaces for organizing. But the Trump administration is reversing those gains.

At the same time, instead of allowing Democrats to appoint board members as the law provides, Trump is leaving those seats vacant. That’s left the NLRB with just three members, all of them Trump appointees whose decisions consistently thwart workers’ attempts to gain union recognition.

A recent report by the Economic Policy Institute details how Trump has “systematically rolled back workers’ rights to form unions and engage in collective bargaining with their employers, to the detriment of workers, their communities, and the economy. … The Trump board and [NLRB general counsel] have elevated corporate interests above those of working men and women and have routinely betrayed the statute they are responsible for administering and enforcing.”

Workers won't give up

Protecting the unfettered right to join a union is critically important not only for individual workers and their families, but for communities and the economy as a whole. The percentage of American workers in a union dropped to its lowest level ever in 2019—just as wage and wealth inequality have peaked.

This is no coincidence. And that unequal distribution of economic wealth and power translates into “shocking disparities in political power,” according to a Harvard University report. “A large part of the explanation for our current crisis of economic inequality is the decline of the labor movement. Unions redistribute wealth—from capital to labor, from rich to poor—and without unions we have lacked for a check on economic concentration.”

As the report said, “Democracy at work should be a right, not a fight.”

Despite all the obstacles, workers in Illinois and across the country continue to seek to exercise that right. Tens of thousands continue to come together to form unions, defying employer threats and intimidation.

“It’s always so inspiring to see groups of workers who stand up to all of the lies and coercion because they want to make their lives better,” Davis said, “and even more inspiring to watch them go on and do just that.”