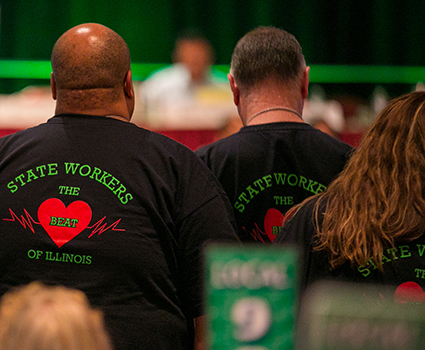 Despite the AFSCME State Employee Bargaining Committee’s clear willingness to resume contract negotiations, Governor Rauner is aggressively pushing the Illinois Labor Relations Board to declare impasse—even asking to bypass a recommendation from the administrative law judge who heard the case.

When the Rauner Administration walked out on contract negotiations in January, they filed an Unfair Labor Practice (ULP) charge against AFSCME for refusing to agree that negotiations were at an impasse. That charge has been consolidated for hearing purposes with a ULP that AFSCME filed against the administration for bad-faith bargaining.

The hearing on these charges got underway at the end of April before the Illinois Labor Relations Board, a Rauner-appointed body, and proceeded on an almost-daily basis for more than six weeks, finally wrapping up on June 9.

AFSCME is asking the Labor Board to require the Rauner Administration to return to the bargaining table, while the governor is seeking the Board’s authorization to impose his own terms on state employees with no further negotiations.

Normally it would take several months for a decision to issue—as there must be time for the parties to submit written briefs, for the administrative law judge who heard the case to issue a recommended decision, and for the Labor Board to act on that recommendation.

However, on the final day of the hearing, the Rauner Administration moved to bypass the judge entirely and have the case go directly to the Labor Board. As an indication of its excessive deference to the Administration, the board immediately called a Special Meeting for July 7 to consider this motion. If the board grants the governor’s unprecedented motion to circumvent its normal procedures, a ruling in this case could come in early August.

If the Labor Board rules in favor of the governor’s request for a declaration of impasse, AFSCME would appeal that decision to the state appellate court. However, Rauner has already made clear he won’t wait for that court to rule before trying to impose his harmful terms on state employees—in which case, their only options would be to accept those terms or go out on strike. That’s why AFSCME local unions in state government are working now to inform all members as to what the stakes are in this critical conflict.