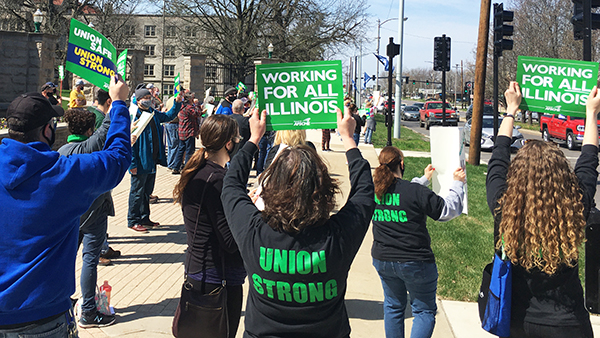 Students at Eastern Illinois University are standing behind AFSCME Local 981 members who are fighting for a fair contract. The union members held a picket on March 30, calling on EIU to support its dedicated employees by providing fair wages and guaranteeing not to outsource their jobs to a private contractor.

The student-run Daily Eastern News printed the following strong editorial in support of the workers, urging the student body to thank them for their dedication and "fight for them to be treated fairly."

AFSCME should get plenty of support in their fight Tuesday

All who are able to stand with the members of American Federation of State, County and Municipal Employees Local 981 Tuesday should.

AFSCME is fighting for a fair contract, which to them includes a wage increase, continue control over their schedules and for the university to not be able to subcontract their jobs out from under them.

It seems like something simple considering what the members of the union offer to Eastern. Whether it’s helping students understand registering for classes, providing a hot meal after a day of classes or sanitizing classrooms for safety, members of AFSCME have a part to play in everyone’s life on campus.

The members of AFSCME, throughout the pandemic especially, have been the backbone of this university. They make it possible for any of us to be on campus safely and make our lives easier in the process.

Now, after a year of working harder than ever for Eastern, they are asking for a fair contract. A contract we at The Daily Eastern News, think they have earned and deserve. We ask that those who agree and are able to stand with them and show they support those whose work has kept this university afloat.

Dating back to Illinois’ budget crisis when union members saw their colleagues lose their jobs and took on more work than ever, those individuals have been completely dedicated to this university.

They have worked tirelessly to take care of the students and employees of Eastern.

Now, it is time to thank them. Thank them with your words, with your actions or whatever else you can think of, but most importantly thank them by standing by them after they have stood by our campus. Fight for them to be treated fairly.