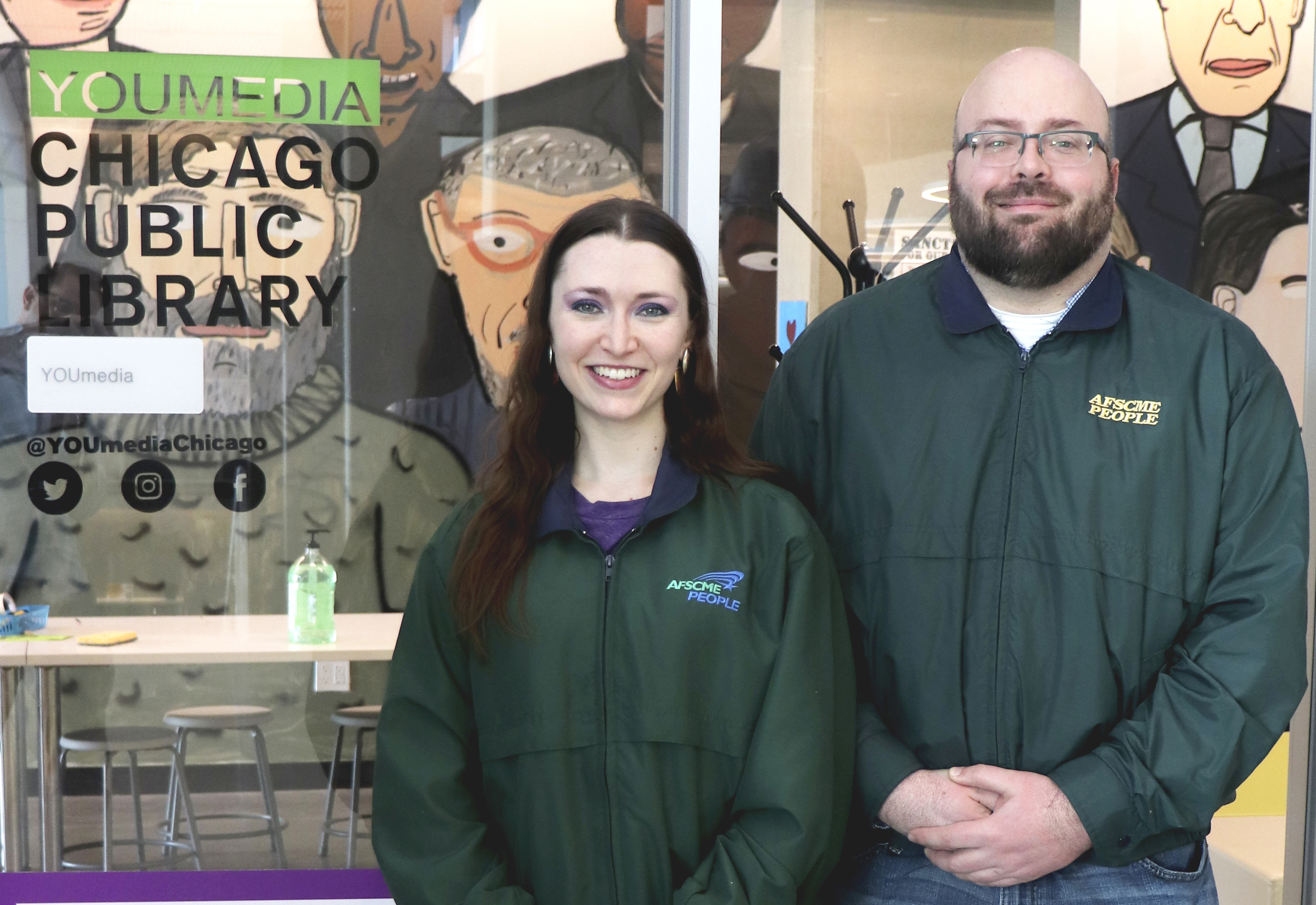 A former bookseller, Jacob Cleary became a librarian at the Chicago Public Library because he “wanted to do less selling and more helping people.”

Now he’s doing just that, as a librarian and as a vigilant steward and treasurer of AFSCME Local 1215.

Cleary heard that a Local 1215 member had asked her steward if she was on the right step after a recent promotion. She wasn’t. The steward contacted Human Resources to fix the error.

Cleary wondered if the same mistake had been made with any other employees. The local’s contract with the city includes two different step progressions based on hire date. Those hired on or before October 16, 2014, are on a higher scale, depending on title.

Cleary looked through his membership list for employees who had been promoted to a higher classification after working for the library since before that date.

He called around and eventually got in touch with Maggie Miller, a librarian at Chicago’s new Independence branch. While getting her master’s degree in library science, Miller had worked her way up from a part-time library page hired in 2013 to a full-time librarian.

“Based on what she shared with me, I saw that she had been put on the wrong step,” Cleary said. “I explained where she should be on the wage scale and asked if she would be willing to sign a grievance.”

Miller was on board.

“I was surprised because it was something I wouldn’t have thought to question on my own,” Miller said. “I’m so glad he caught it. I felt lucky that he’s our union steward.”

Cleary filed a class-action grievance on Miller’s behalf, believing that CPL placed other members on the incorrect step upon their promotion. The grievance went to arbitration with Cleary and Miller as the union’s witnesses.

“The union argued that the contract was unambiguous and that employees like Miller should be on a higher step,” AFSCME Council 31 attorney Scott Miller (no relation) said. “The arbitrator agreed with us.”

On October 29 the union won a decisive victory. The arbitrator ordered the city to “immediately place [Miller] and similarly situated class members at the step and salary applicable” and further that “the employees shall be made whole for their losses.”

The arbitrator retains jurisdiction in the case as the class is identified and notified. AFSCME will be there to ensure justice is served.

“This was a big win for Maggie Miller, but it wasn’t just for her. It’s a local-wide victory,” said Local 1215 President John Rayburn, who also serves on the Council 31 executive board. “There are a large number of people who could be affected.”

Rayburn said that when management added the sub-steps for new hires during contract negotiations, he and his bargaining team took extensive notes and relied on those as well as the contract itself to make their case to the arbitrator.

“When we got the phone call and the email that we won, we were celebrating,” Rayburn said.

Cleary said the arbitrator’s award “feels great” and was ultimately because a union member asked a steward an important question: “Does this seem right?”

“I’m very proud that our library system has a union and we have really good stewards like Jacob,” Miller said. “Unions are very important. We look after each other and take care of each other.”