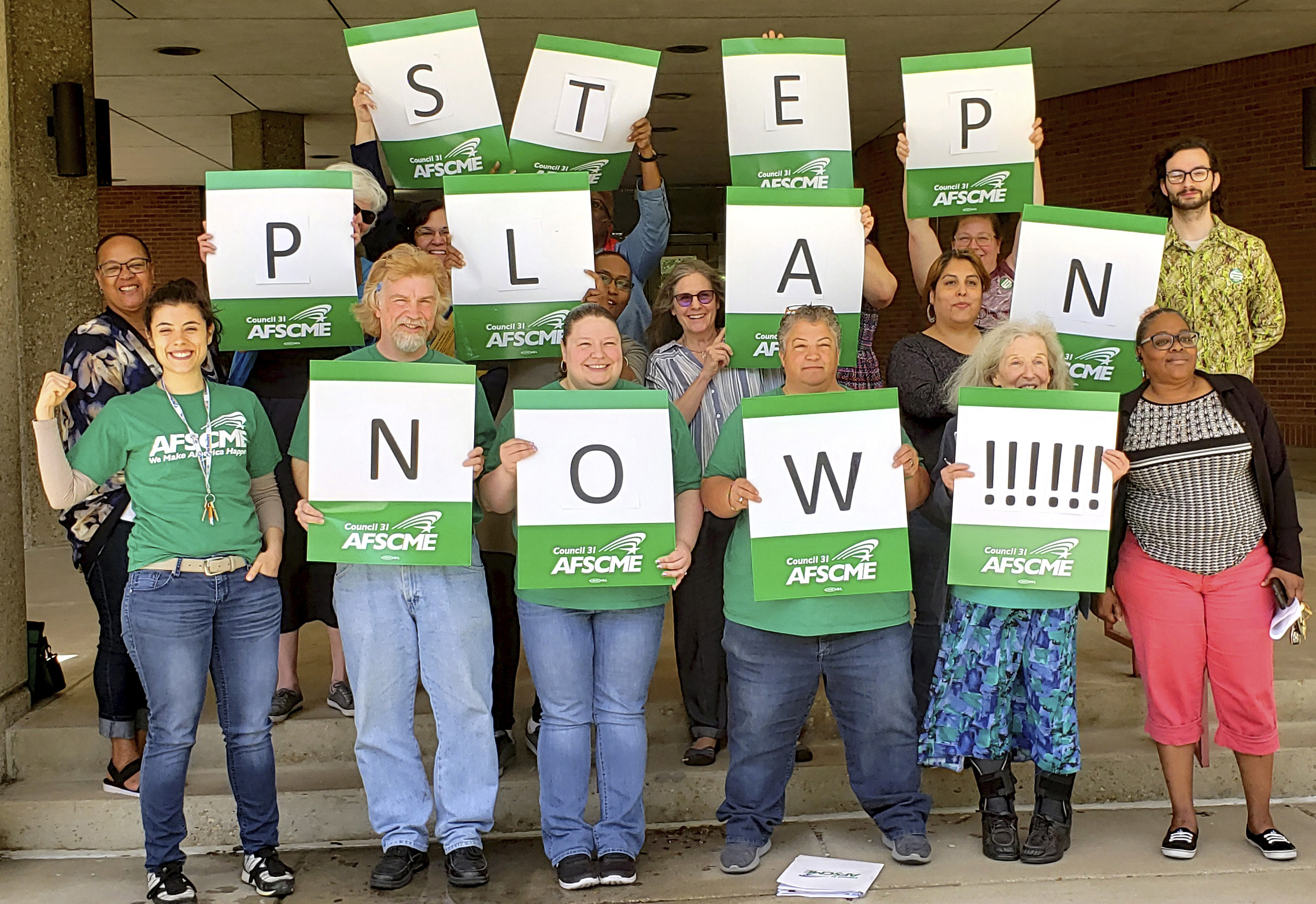 Working together, AFSCME members at public universities around the state who are currently in contract negotiations are making the case for fair wages and step plans that reward years of experience and loyalty.

Members of AFSCME Locals 1110 and 3236 at ISU have been working under an expired contract for more than a year. Stepping up pressure for a fair agreement, they brought their case for a living wage to the ISU board of trustees meeting on July 26.

These more than 500 buildings and grounds, dining, clerical, library and health care employees have been negotiating a new contract for more than a year but the university has been stalling on real wage increases, said AFSCME Council 31 Staff Representative Renee Nestler, leaving employees to fall behind while the cost of living goes up.

“Some employees are finding it unaffordable to work at ISU or they need second jobs,” Nestler testified to the board.

“With ISU expecting its largest freshman class ever, having had the best fundraising year ever and set to receive a 5% increase in state appropriations, why isn’t there a willingness to invest in these dedicated employees?”

ISU employees are paid $1.50 to $3.00 an hour less than employees at the University of Illinois Urbana-Champaign doing similar work with the same titles, civil service tests and hiring procedures. At the same time, employees aren’t rewarded for longevity and are working harder than ever as positions remain unfilled.

The next bargaining session is scheduled for late August.

Setting the standard at NIU

Two AFSCME bargaining units covering nearly 900 employees in administrative, building, housing and dining services at NIU have proven to be a powerful force for negotiating fair wages for all campus workers.

AFSCME Local 1890 members have had their first union contract in place with NIU for a year now and a successor agreement for Local 963 members at the university has been in place for roughly the same time.

Local 1890 organized several years ago and had to fight to finally get their signed union contract. After a prolonged struggle with the administration, they won guaranteed 3% annual raises in every year of their contract or the campus-wide raise, whichever is higher. Local 963 was then able to secure the same.

“Despite not giving raises for years, the university decided to give the entire campus a three percent raise during our negotiations,” AFSCME Council 31 Staff Representative Sara Dorner said. “They never would have done that had we not pushed for it.”

“Never in the seven years I’ve been there did they pay us raises—until they were forced to,” said Debbie Williams, the local’s membership chair and a bargaining committee member. “If it weren’t for us, fighting and holding on to that three percent, nobody would have gotten it.”

Williams said she and her fellow members also secured an additional 3% raise for the second year of the agreement so she anticipates the university will again make it a campus-wide increase.

“They never wanted us to have a union and now they don’t want us making them look bad,” Williams said. “They don’t want AFSCME members to be the only ones getting a raise because then other employees will start pushing back too.”

Setting the standard on campus is an accomplishment that AFSCME members can be proud of, Dorner said.

“Because they fought, picketed, rallied and organized for a fair wage increase, everyone else on campus is getting one too.”

Step plan the focus at NEIU

After working for almost a year under an expired contract, NEIU employees represented by AFSCME Local 1989 are still pushing hard to reach a new agreement. The union members are committed to gaining a step pay plan that rewards loyalty and ensures that wages keep up with inflation.

“Everything goes up—rent, electricity, gas and water,” said Lucia Campo, a 20-year NEIU employee. “But my salary does not go up. It makes it very difficult to maintain a home of four people.”

When adjusted for Chicago's cost of living, NEIU has the most lowest-paid civil service classifications in the Illinois public university system. Even in areas where the cost of living is much lower, commensurate staff salaries are higher.

A step plan would ensure that each employee has a ladder with rungs to climb from the bottom to the top, said Council 31 Staff Representative Kathy Steichen.

NEIU employees have endured two multi-week furloughs and a round of layoffs that has increased workloads for those that remain. They want to see a fair reward for their dedication.

“NEIU employees are dedicated to student success,” said Tracy McFall, who has worked at the university for 12 years. “It’s time to make us—the people who are the heart, soul and face of this university—a priority.”