Vote for a voice on IMRF pension board 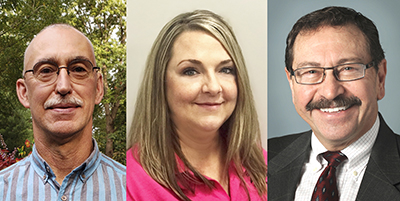 In the IMRF Trustee election, the IEA and AFSCME recommend AFSCME member Tracie Mitchell and IEA member Hugh Cunningham to serve a five-year term. In the Annuitant election, AFSCME recommends Louis Kosibo. Ballots for both elections must be received by the IMRF by December 4.

You are eligible to vote in this trustee election if you were an active IMRF member during the month of September 2020. Your ballot—and postage-paid return envelope—was mailed at the end of October with instructions and candidate biographies. Please fill out the ballot for TWO candidates, Tracie and Hugh, and use the postage-paid envelope to return the ballot as soon as possible. To be counted, ballots must be received by December 4.

Tracie Mitchell is an Emergency Communication Specialist for the Central Illinois Dispatch Center. She is Recording Secretary of AFSCME Local 268 and serves as both Member Chair and PEOPLE Chair for her local. Tracie is a relentless advocate for public service workers and knows first hand the importance of maintaining the retirement security that comes with IMRF participation. In 2018 when the City of Decatur transitioned dispatch operations to a new employer, Tracie fought to ensure employees would maintain their IMRF status. Tracie seeks election on the IMRF Board of Trustees to carry on the work of previous AFSCME-backed trustees to preserve the fiscal security of the pension fund and the continuation of pension benefits.

Hugh Cunningham is the copresident of the Triad Custodial, Maintenance and Utility Association (CMUA)/Illinois Education Association (IEA). He has served on numerous bargaining teams to represent the interests of the local union members in the TRIAD Community Unit School District in Madison County. Hugh has been an active union leader and will continue to advocate for the retirement security of all participants within the IMRF.

IMRF retirees will elect an Annuitant Trustee in the November election. AFSCME Chapter 31 is supporting former IMRF Executive Director Louis Kosiba. Please fill out the ballot for Louis and use the postage-paid envelope to return the ballot as soon as possible. To be counted, ballots must be received by December 4.

Louis Kosiba is the former Executive Director of the IMRF and member of AFSCME Retirees Chapter 31. During his 28 years with the IMRF, Louis was both the manager of field services and general counsel in addition to executive director. He has been a staunch supporter of guaranteed pension benefits and the rights of employees and retirees under both the Illinois Pension Code and the Illinois Constitution. He will bring his experience, expertise and energy to the table to keep IMRF the best-funded pension system in Illinois. He will be an effective and powerful voice for retirees.